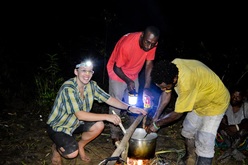 In February, I quickly flew to Madang to conduct regional training for the survey we are about to start. Myself, Bonny and our new ornithologists were conduction a 4 day long survey in quite difficult conditions. We had wonderful good luck for weather, huge numbers of hungry mosquitos ... all ended up well, and I think we did an excellent job.

I have do not have many photos (which only means I was very busy) but here are ﻿﻿﻿some to document the conditions﻿﻿﻿.

Photo on the left: Myself, Penniel Lamei and Bonny Koane during dinner preparation. Best times ever.

My assistant and students were continuing their field work on several projects throughout 2015.

Exclosure experiment along the elevational gradient - starting in April 2014

In April 2014, my assistant left for a "month" long field work. He left with nets and glue, dug himself somewhere along the elevational gradient of Mt. Wilhelm, and came back no sooner than after 3 months. I was already worried what happened to him, but he seemed to be fine, doing properly what he was suppose to do. It just took much longer (and cost more money) as usually. With small break (for ATBC conference) he is back in the field, collecting the data from the upper most elevations. No disasters reported till now - fingers crossed. I am patient at home, taking care about my little one, analyzing older data, and waiting for arrival of new leaf-frames. Btw. leaf-frames will drive me crazy soon :-)

In June and July 2013, I worked again along the elevational gradient of Mt.Wilhelm. I did some surveys on birds on the plots I used previously for my PhD. research.  I surveyed birds between altitudes 2700 m and 200 m asl. and collected also specimen of some very rare species for museum collections. I revealed few new species for the gradient, and also some altitudinal shifts. I also helped to my partner Legi Sam with his project on Ficus transplantation. We were sampling the insect on many Ficus trees, and we prepared some species for transplant experiments which will start early next years.

I placed 10 exclosures on trees, protecting them from birds, and 10 controls in 4 habitats early in year 2012. I left the exclosures exposed for 2 months, and I collected all insect and leaves from all experimental trees after that. Currently, I work on identification of insect collected, and on the calculations of leaf damage, and leaf are of all trees. Results will be published during 2013.


3-March-2013: All insects are sorted and most of the leaf frame analized 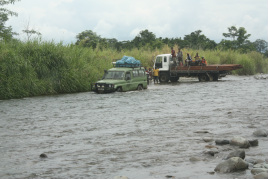 We left to altitudinal gradient of Mt. Wilhelm, in May 2012. I wanted to finish 5 days of point-count, 3 days of mist-netting, and whole experiment of predation rates. The field conditions were really hard this time, as we were getting rain every single day for more than a month. Finaly, we managed to finish all work in mid-September. Predation experiments were done on 30 trees of 2 species per elevation, and we places 10 caterpillars per tree. Half of the trees served as control and did not have any herbivory damage, and half of the trees had leaves damaged by insect. In August, I also left to West Virginia, to attend the Annual International Workshop on Malaria and Related Haemosporidian Parasites of Wildlife.

May 8th - We have resources and we have plan 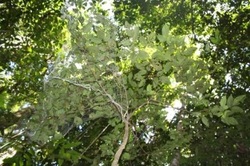 I went to Wanang 1 and Wanang 3 to place exclosure experiments. This activity took me exactly 5 days - 1 day drive and walk to Wanang 1, next day walk to Wanang 3, where I came very tired but still able to have look around to check on some good trees. I was searching mainly for Ficus congesta and conecephafolia, about 5 metres high saplins that could be pulled down and divided virtually into two halves. One served as experimental and one as a control. We made a light twig construction and fastened it on the tree. Finaly we covered whole construction by fishing net of mesh 4x4 cm. We repeated this procedure 20 times around a 2 km long track, and finished the work after day and half. Later in the week, I left to Wanang 1, which took me 5 hours, started to repeat the same procedure in secondary plots and along gardens. The work was finaly finished after 5 days, and we left Wanang 1 with emergency car, that came to pick up our colleague Andrew. I have exactly 9 days to the start of our big elevational patrol on Mt Wilhelm. Photos from the trip to Wanang could be found here.